You may notice that for artifacts 05.04.10 Subject ID Log and 05.04.11 Source Data there is no requirement for them to be in the sponsor TMF, as shown by “NO” in column N and column P of the Reference Model. But in column W, the artifact is shown as a site-level document. This may seem to be a discrepancy. However, if you look in column O and column Q, these artifacts are shown as investigator documents. So the reason they are identified as core is because they are core documents for the investigator TMF (aka ISF), and as a site document they’re filed at the site level.

We try to send meeting notifications to all of our different groups so that everyone who is interested has the most up-to-date information about our meetings. We send a mailing to subscribers, we post to the project team members via groups.io and we post to the Yahoo!Groups discussion forum.

However, if you somehow missed these notifications but still want to find out when the next meeting is, just refer to the online calendar of upcoming events on our homepage (its just there in the right-hand column). Once we have the web conferencing system details, we add those to the calendar item. You can download this directly to your computer to add it to your own calendar application (e.g. Outlook or Google).

Note: we do not send out a meeting invite for these meetings. If you are interested in attending, you will need to create your own meeting event in your calendar or download the details from our online calendar.

In general, when artifacts are removed during a revision, the remaining artifacts are not renumbered or re-used as that would have a major impact for those companies still using an older version of the Reference Model. Imagine if a CRO was using 05.02.15 for a Delegation of Responsibility Log but the sponsor was using 05.02.18 for the same document. It would make document exchange even more difficult than it is already!!

The TMF Reference Model is intended to cover the full scope of the Trial Master File as described in ICH E6 Good Clinical Practice Guidelines. ICH E6 GCP Guidelines include all the content that the sponsor is required to maintain in the sponsor TMF and all the content that the investigator is required to maintain in the investigator TMF; the latter is sometimes referred to as the ‘investigator site file’, the ‘ISF’, or the ‘regulatory binder’. 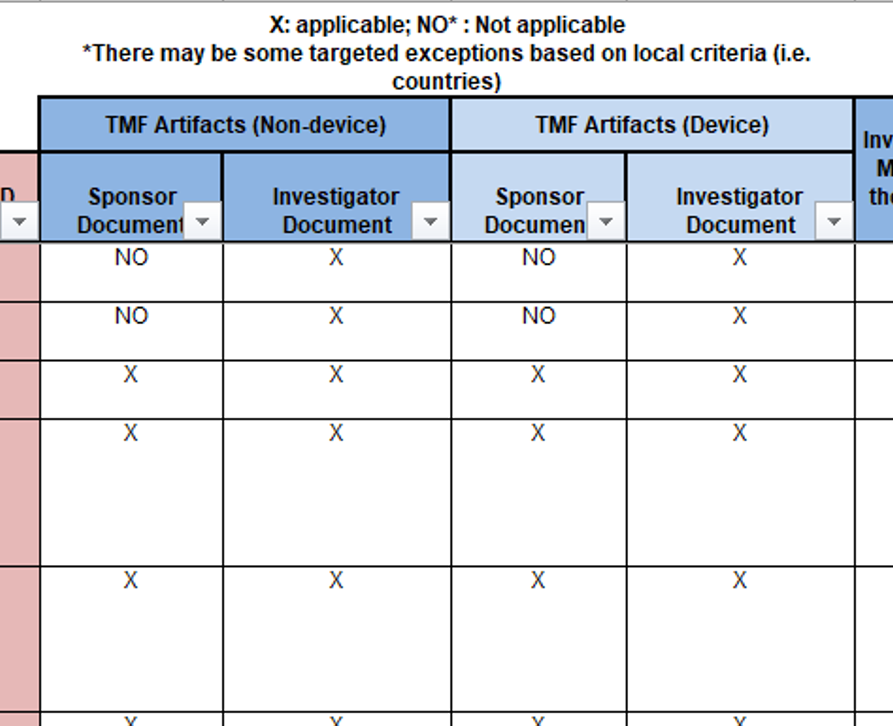 Change requests for the TMF Reference Model are being submitted on an ongoing basis via the website. In addition, some of our project initiatives produce deliverables that result in additional content to the Model. It is the responsibility of the Change Control Board to make an impact assessment of these changes to determine if they may be implemented immediately as a maintenance release (minor changes and no impact on current systems), as a minor release (significant change to content but no significant impact on current systems) or as a major release (impacts current systems). Once this assessment has been made, the Steering Committee will agree a release schedule. The schedule may include a maintenance release (e.g. v3.0.1), a minor release (e.g. v3.1) and may also include a major release (e.g. v4.0) but the schedule is based on proposed and accepted changes rather than by a predefined timeline. A public announcement will be made via this website and to registered stakeholders ahead of any release (maintenance, minor and major).

Question:
According to the TMF Reference Model, the master Informed Consent Form should be filed as artifact 02.02.03 but I’m not sure where a site-specific ICF should be filed. As this is a site document, should it be filed somewhere in zone 5?
Answer:
Several artifacts can be filed at multiple levels: study, country and/or site. However, the artifact number (e.g. 02.02.03) does not change. So in this example, the site specific ICF is still filed as artifact 02.02.03 but at the site-level of the sponsor TMF rather than at the study-level. Depending on the technology used in an eTMF, you may need to assign unique IDs for artifacts that exists at multiple levels within the TMF. In a paper TMF, the documents would be filed in the study-level binder, the country-level binder and/or the site-level binder(s), as appropriate.
October 24, 2016

Question: It appears that “acknowledgement of receipt” is now specifically noted as a sub-artifact under IRB or IEC Submission, while “documentation received from the IRB/IEC in response to submission indicating acknowledgement” remains within the definition of IRB or IEC Approval. Can you confirm and clarify any intended distinction?
Answer:
An Acknowledgement of Receipt in 4.1.1 is just to show the submission was received, but has no implications of approval. In 4.1.2, an acknowledgement can actually replace an approval in some circumstances. 4.1.2 is where you would look for any kind of approval or acceptance by the IRB/IEC. If confusing to users, the sub-artifact Acknowledgement of Receipt in 4.1.1 may be deleted.
February 24, 2106

Question: I do not understand why artifact [xyz] is included in the TMF Reference Model as there doesn’t seem to be a regulatory requirement for it to be included.
Answer:
If there is a specific regulatory requirement for an artifact or the general opinion of the TMF Reference Model Community based on past experience is that regulatory inspectors would usually expect the artifact to be filed in the TMF, the artifact is included as a “Core” artifact (column J).
However, there are other artifacts generated on a clinical trial where it is not so clear whether or not they should be considered part of the TMF. So these are either omitted from the Reference Model or are included as “Recommended” artifacts. Artifacts are included as “Recommended” if the overall opinion of the TMF Reference Model Community is that the artifact is study-specific and contributes to explaining how the study was conducted. In an inspection, it would therefore be helpful if these “Recommended” artifacts were treated in the same way as for the “Core” artifacts….. readily accessible, secure, retained in accordance with TMF requirements etc.
Let’s use an example: 05.04.07 Financial Documentation. Whilst there is not a specific GCP requirement to include them in the TMF, it is often helpful for certain financial records (for example spreadsheets that track payments) to be considered part of the TMF and be readily available to inspectors (and to the study team!). They demonstrate how the trial was managed.
Using 05.04.07 as an example, it is important to note that
(a) inclusion of 05.04.07 does not imply that ALL financial records should be in the TMF….. it simply provides a placeholder for those financial records that your company deems should be included (perhaps just the tracking sheets/reports?); and
(b) inclusion of an artifact does not necessarily mean the records should be in one, single TMF system….. it just means they are considered part of the Trial Master File and managed as TMF content, per your company SOP(s).
January, 2016

Unanimous opinion across the TMF Reference Model is that draft versions of documents should not be kept in the TMF, including versions with track changes.
Key reasons include:

Individual comments from Reference Model Team members:
“Most sensible SOPs on controlled documents would provide for the retention only of approved versions of documents and the discarding of drafts. It may also, depending on the document review and approval process, be necessary to keep sufficient documentation / correspondence to demonstrate that processes have been followed per SOP.”
“Drafts and annotations should be deleted upon promotion to approval.”
“From a potential litigation perspective, it can be extremely dangerous to retain draft documents following completion/approval of the final document. If there is a regulatory need – as sometimes there is – to maintain an audit trail to demonstrate that a document was properly reviewed as per an SOP, other means should be used to enable such an audit trail to be retained. For example, many sponsors maintain some kind of document review form (or electronic equivalent). This form contains signatures of reviewers and the version of document reviewed but does not contain their review comments. A sponsor has no obligation to either accept review comments or to respond to review comments. It is usually sufficient simply to demonstrate that a proper review was conducted and the final document was approved by a duly authorised individual.”
“Many sponsors include in their corporate retention policy a requirement to destroy drafts; retention would therefore be non-compliance with company policy.”
“There may be only one exception, namely protocols. European Directive 2003/63/EC contains the requirement to retain “all written opinions on the protocol and procedures”. However, even this does not suggest keeping drafts, merely any “written comments” on the protocol. Furthermore, the requirement to retain “all written opinions” could be interpreted to apply only to the final protocol and approved procedures, rather than to draft documents.”
“Some systems actually delete all draft version a specified number of days (e.g. 30 days) after the document is approved. Part of the discussion for that decision was performance concerns if having to maintain minor versions. Also it was augmented that only things relevant enough to actually be approved should be retained in the system.”
“Draft documents are not filed in the trial master file unless they report important decisions or new information about the trial. For example, the study team would file the Core ICF, Country-specific ICF or Site-specific ICF “Tracked Changes” documents if revised due to a protocol amendment.”
“Drafts should be administrative, and should be filed as such.  They can be kept in other storage locations and used for development reference.  No-one audits to drafts.”
“If a health authority is inspecting to Track Changes versions, then there is a bigger problem than just what is in the files.”
“Only the final document should be in the TMF. Drafts documents are working documents and if retained, should only be keep until the study is finished. They would only be archived if that is the company policy.”
June, 2015

Question: We are looking for the best way of standardizing our filing system of documents issued during non-interventional trials (e.g. Post-Marketing Surveillance). These trials are getting more and more structured and require a centralized approval for being conducted in a lot of countries. Do you know whether some guidance exists for structuring a TMF for these types of trials?
Answer:
We are not aware of any guidance specific to filing of documentation for non-interventional trials. Whilst guidelines exist for the ethical conduct of such studies (for example, CIOMS International Ethical Guidelines for Epidemiological Studies), the guidance does not extend to TMF management.
Non-interventional trials are excluded from the requirements of ICH GCP and many other regulatory and legislative requirements that govern interventional trials. However, they should follow relevant national legislation where this exists (ref. Eudralex Volume 9A, Part 1, Section 7.7). For example, in the UK Clause 13 of the ABPI Code of Practice for the Pharmaceutical Industry requires that non-interventional trials comply with certain criteria, including having a written protocol, having written contracts and submission of the protocol to an Ethics Committee. When using the TMF Reference Model as the framework for the design of a TMF model for non-interventional studies, a repeatable corporate model can be created while remaining consistent to this industry model. It is recommended that when establishing a TMF for non-interventional studies, the principles of the TMF Reference Model are followed in terms of terminology and structure, recognizing that modifications to the taxonomy (e.g. removal of unnecessary artifacts) might be required to ensure alignment to standardized business processes.
May 8, 2015

A project team has been reviewing the TMF Reference Model for applicability in non-interventional (aka “real world” studies). Their conclusions will be published on this website soon.